THE ATHEIST CASE FOR NIXMAS

Have you ever noticed that in the season prior to Christmas, people seem to be just a little bit nicer to each other than usual?  It’s something I’ve observed year after year – and I wistfully hope that the spirit of the season would continue throughout the entire year.  Sadly, it seems to evaporate as soon as the party noisemakers are blown and the last glass of champagne is consumed.

On a fundamental level, the story of Jesus’ birth should stir at least a twinge of emotion in all of us, whether or not you believe that He was born as Savior to redeem mankind from the sins with which we bind ourselves.  After all, here is a humble family who find refuge for the Nativity in a barn, surrounded by farm animals.  Nothing fancy, nothing splashy, nothing that would portend any great events yet to come.  Perhaps that, if nothing more, is the reason that many of us take the time to reflect on the beauty and mystery that is life – and causes us to be a little more generous, a bit more compassionate and just a smidgen more caring for our fellow men – at least for a few weeks.

Then, of course, those of us who are fortunate enough to have a roof over our head can enjoy the camaraderie of sharing meals with family and friends.  The smells of the season, whether those come from the cookies baking in the oven or the incense of the Midnight Vigil and celebration of the Liturgy of the Nativity, appeal to our sense of smell and the decorations and light displays excite our vision.  At least that is the case for some of us.

Then there are those who profess atheism as their religion of choice, while denying that they have any religious convictions.  Not to engage in a debate on the subject which might embroil us in little more than a semantic conversation, let’s stipulate that an atheist, at least in America, is entitled to hold and express her convictions just as are Jews, Muslims, Baha’i’s, Buddhists, Christians or anyone of any other religious conviction.  If an atheist wants her position to be respected, it seems natural that they would respect the positions of others whose views might differ from their own.  But that doesn’t seem to be the case, as the following billboards demonstrate: 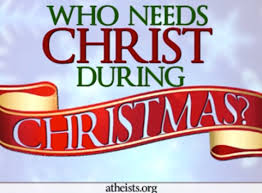 American atheists generally direct their anti-religious message towards those of the their fellow citizens who are Christians, reserving their antipathy to members of other faiths with generalized derision in the belief in any God.  So why do those who believe that Jesus is Lord deserve their special attention?  This has puzzled me for many years so I thought that I would do a little research into the subject.

Samaritans Purse is a name with which you might have recently become familiar because of the recent Ebola outbreak in West Africa.  They have sent and paid for the cost of providing medical practitioners to the area to help those who were ravaged by the disease – all because of the contributions they received from those who support their work.  Perhaps our atheist friends believe that they have simply not done enough.

We are all familiar with the bell ringer volunteers that the Salvation Army puts in front of our stores during the Christmas season.  During the Great Depression, the Salvation Army was the only charitable organization that freely gave out food to those in need.  In 2013, the Salvation Army provided assistance to 30 million Americans with services that ranged from providing food to individuals and families in need, veterans services, half-way houses, prison ministries and services to the elderly and shut ins.  Although my atheist friends must think I’m crazy, I never hesitate to drop a few dollars in those red kettles every time I pass by one.

I grew up with “Make Room For Daddy” and adored Danny Thomas who founded St. Jude Children’s Research Hospital.  Thomas loved kids and showed this by establishing this incredible hospital which is totally dependent on donations for its continued works as it does not charge any family for any of the services it provides to the children who come there to be treated for their complex and costly medical conditions.  Although Danny Thomas was a Maronite Catholic, St. Jude does not restrict its practice of free treatment to Catholic children in need but accepts all children as patients irrespective or religion or race.

Catholic Charities is probably the largest and best funded of all Christian charitable services.  It provides assistance by operating shelters for the homeless and abused women, services to immigrants including teaching English, nutrition through the Meals on Wheels program, companion programs for the elderly, just to name some of their activities.  Catholic Charities provides assistance to over 40 million Americans per year.

Despite these obvious good works, the atheists in American society continue their campaign to turn Christmas into Nixmas and spend their money putting up billboards and filing lawsuits, demanding that symbols of Christianity be removed from public display.  Personally, I think the money could be better spent – but that’s just one person’s opinion.

As I try to keep an open mind, should any of my readers who holds an atheist view of life be kind enough to provide me with the name of an atheist organization that actually spends its donations helping children, providing housing for the homeless, feeds the hungry or offers free medical treatment for those in need, I will be happy to make a contribution to their good work.  But irrespective of whether I hear from anyone with that information, let me take a moment to wish all readers, religious or otherwise, a Merry and Blessed Christmas, and a heart filled with charity.

HOW LOWERING THE MINIMUM WAGE COULD SAVE AMERICA

Comments on: "THE ATHEIST CASE FOR NIXMAS" (3)